I just finished a book titled The Beantown Girls.  This book is historical fiction that was based on actual events and experiences of women in World War II who would come to be known as the Doughnut Dollies.  The name wasn’t given to them as a term of ridicule… the combat troops loved seeing the ladies and their clubmobiles.  They served a purpose.

Let me tell you… I was fascinated by the subject.  I had never heard of American women who volunteered to serve with the American Red Cross Clubmobile Service during war times.  (My father fought in WWII, North Korea and Vietnam.  I’ve never heard him mention any thing like this.  Of course, he never liked to talk about those times … good or bad.) 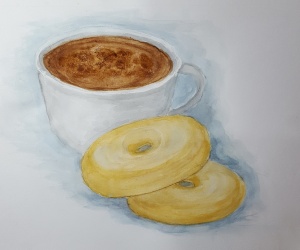 The American Red Cross Clubmobile Service was established during World War II at the request of the U.S. Armed Forces.  There was seen to be a great need for some kind of mobile service that could go where the troops were… to help them, even briefly, forget about war.  The idea of a mobile club that could dispense coffee, doughnuts, snacks,  paperback books, and entertainment staffed by friendly young American women “from back home” was born and grew.

Women had to be between the ages of 25 and 35.  They went through an extensive interview process before being shipped to London for weeks of extensive training.  (Wartime London.  Like when the buzz bombs would drop from the sky.)  Unless I misread something, I think that one in six were accepted to this new Red Cross program.  Those accepted had to have some college or work experience, to be “healthy, physically hardy, sociable and attractive”.  I’m not talking beauty queens, I’m talking about the all-American girl next door who could take the rigours of the job (which would include learning to maintain the kitchen equipment and supplies, as well the truck itself).  They had to have the kind of personality where they could keep smiling and carry on an upbeat conversation with the battle worn troops they would be serving.  These young women gave up jobs, comfortable homes, their safety, to sign up for this volunteer mission. They didn’t have to go.  They wanted to go.  And they all had their own, personal, reasons.

They would evolve a bit over time, but the first of these doughnut and coffee shops on wheels were remodeled London buses.  It took a team of three to run them. These had a kitchen with large often unpredictable doughnut making machines, large coffee urns, a pantry of supplies, one side that opened with a counter for serving (just like modern day food trucks), and a “victrola” with speakers so they could entertain the troops with popular music of the time.  These trucks also had a space that could be converted into a sleeping area for the team of three should it be necessary.

Prior to the invasion of Normandy, smaller 2-1/2 ton trucks were converted to  clubmobiles and the girls again had to learn how to drive and service them.  Once across the channel, after training, there would be no male driver assigned to them as they had during their time in England.  These were trucks with no power steering, no air conditioning, no GPS!  This was no joy ride.

Doughnut Dollies on the Job

In July of 1944, once it was deemed safe enough, the Doughnut Dollies and their trucks were sent across the channel into France with the rear echelon of the U.S. Army.  They would be assigned to cover various troops and air bases behind the front lines where combat troops and others were on short rests from the front line fighting or in areas where there was a lot of troop movement behind lines.  Don’t think that these ladies never got close to the fighting.  Sometimes, they would have to scramble to get out of an area when lines would change and the Germans would make a surprise advance. Weather was often a problem and like the troops they served, rain or shine, bone freezing temps or not… they had a job to do.  And they did it.

It was no vacation.  They witnessed death, destruction and battle injuries.  They cried in private and presented smiling, confident faces as much as possible.  They became sister, aunt, or cousin to many on their assigned tours.

The Doughnut Dollies continued service throughout France, Belgium, and Germany until V-E Day in 1945. They also provided service in Great Britain and Germany on a limited mission until 1946.

Later variations would operate on missions in both Korea and Vietnam.  And yes, these Red Cross volunteers did sometimes become injured or worse.  In Vietnam, three Doughnut Dollies lost their lives while serving.

Finally! Recognition for the Doughnut Dollies!

I discovered that someone has finally realized these amazing women and their service during war times need to be recognized.  A documentary to the Doughnut Dollies who served in Vietnam has recently been made.  I hope one day to get to view it.  I hope everyone, one day, gets to view it.

If you find this subject as fascinating as I do, please look them up on the internet.  There are several sites out there.  I recommend http://www.clubmobile.org for a history of these amazing women.  There are also several books by those who served or by those related to the ladies that served.

Doughnut Dollies… I applaud and thank you!